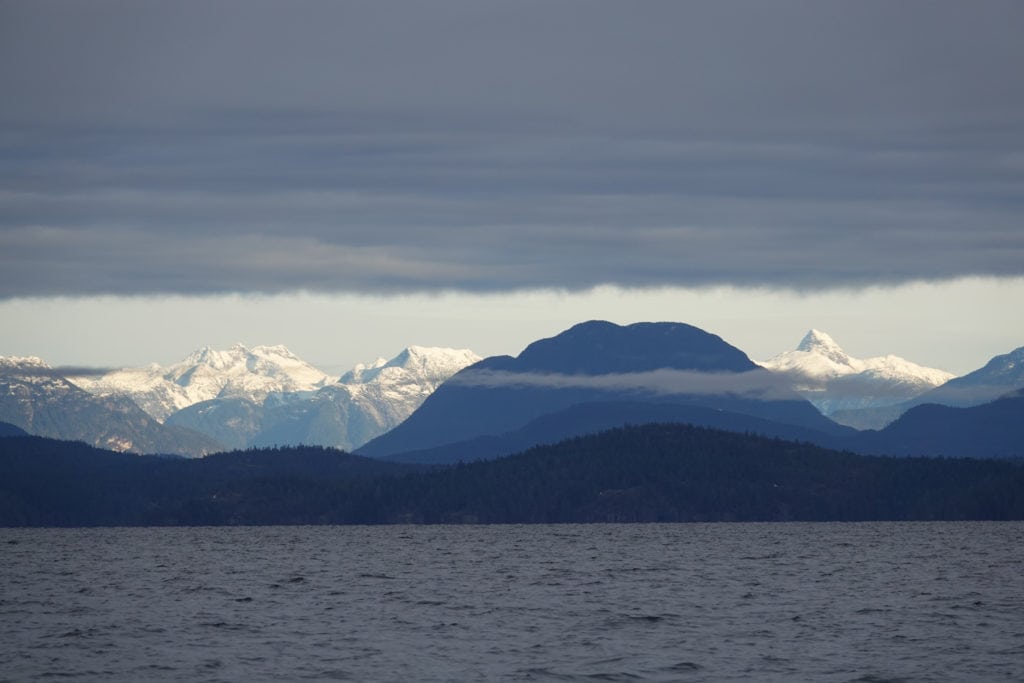 Our tours are not only about viewing wildlife ethically and sustainably, but also about enriching our guests with the history of all of the cool places that surround us!  From the Discovery Islands to the different inlets, we are so lucky and privileged to have so many fascinating points of interest to share with you!

Seeing these different areas ultimately depends on which direction the tour takes.  The route is decided before departure and is determined by where the wildlife has been spotted, what the tides are doing, and what the weather forecast is.  As much as we would love to show guests every cool place in our area, it’s impossible to show everything in one tour!

Pre-COVID, our most common picnic spot was Big Bay on Stuart Island.

This is a privately owned community dock and general store that does not have ferry access.  It’s one of the Discovery Islands located close to Sonora Island in the mouth of Bute Inlet.  Stuart Island is between the mainland coast of British Columbia and Vancouver Island and Big Bay is about 36.5 nautical miles from Campbell River.  The quiet area has lush green grass, picnic benches, hiking trails, a stunning view of the ocean, and a few lodges in the surrounding area.

If our day has us travelling south of Campbell River, one of our stops is at Mitlenatch island.  It was named a Nature Provincial Park in 1961 meaning that all natural life is protected on land as well as 300 metres from shore.  This includes but is not limited to a number of seabirds, harbor seals, sea lions, and river otters.  Mitlenatch island, which means “calm waters all around” in Coast Salish, is the home of the largest seabird colony in the Strait of Georgia.  A few types of birds found are Pelagic Cormorants, Pigeon Guillemots, and Black Oystercatchers.  It is only accessible by boat and most of the island is closed to the public.  Specific research permits are required to be able to set foot on land.  Due to the semi-arid conditions of being in the “rain shadow” of Vancouver Island, Mitlenatch receives less than 75cm of rain each year which is half of Campbell River’s average!

Did you know that the largest non-nuclear man-made explosion in history took place here on April 5, in 1958?  It was one of the first events to ever be broadcast!  You can see this spot in two different ways on a tour with us:  from the water on one of our whale watching or wildlife tours, or overlook Seymour Narrows from a rock bluff on our Ripple Rock guided hike!  This explosion came to be because there was a twin-peaked mountain right under the water that sank hundreds of vessels.  At low-tide, there was only three meters of clearance that created giant whirlpools that sucked in small boats and threw big ships off course.

Leading up the event, people were warned to board their windows and head to high ground as it was thought that downtown Campbell River would end up underwater due to the tidal waves and explosion aftershocks.  The blast shot 635,028 tonnes of rock and water 305 metres into the air over the course of just 10 seconds, but most people felt and heard nothing. Even aquatic wildlife was deemed unperturbed. Careful monitoring by the Fisheries Department found that five Orca, a school of porpoises, two sea lions and one fur seal seen near the area before the explosion were all seen again afterward. If you’re interested in seeing the broadcast and finding out more, head over to the Campbell River museum!

Located 40 km north of Campbell River is the Chatham Point Lighthouse.  The light was first erected in 1908 and is not on any of the buildings or towers at Chatham Point…instead it is positioned about 100 feet off the point built on a cement pillar anchored to a drying rock.  The boathouse, keeper dwellings, and fog signal were built in 1957.  It is now owned by the Canadian Coast Guard and is still manned today.  It is tasked with keeping track of marine and weather data.  It is also a contributor to marine mammal sightings.

For those who are keen on seeing Orca, Robson Bight is most likely a place that you have already heard of.  We are only able to reach this area on our 7-8 hour whale watching tour as it’s located 10km south east of Telegraph Cove, which is a 3 hour drive to Campbell River.  This area is famous for the beaches of smooth pebbles that Orca rub their bodies on.  Beach rubbing is an important behavior for the Northern Residents. Robson Bight was established as an ecological reserve in 1982 and is legally designated (under the Species at Risk Act) as Critical Habitat for Northern Resident Killer Whales.

This area is a sanctuary for killer whales and all boaters (motorized and non-motorized) are expected to not enter the reserve to reduce disturbance to these whales while they feed, socialize, and use rubbing beaches. To support its role as a sanctuary, the upland portion of Robson Bight (Michael Bigg) Ecological Reserve is closed to all uses or entry. Ecological Reserves provide the highest level of protection for the maintenance of physical and biological diversity while allowing for research and educational activities.  Though we are not allowed to enter into the area, there is a live camera feed and recorded video thanks to OrcaLab!  This is a great resource to actively hear the different sounds they make and what behaviors they have.