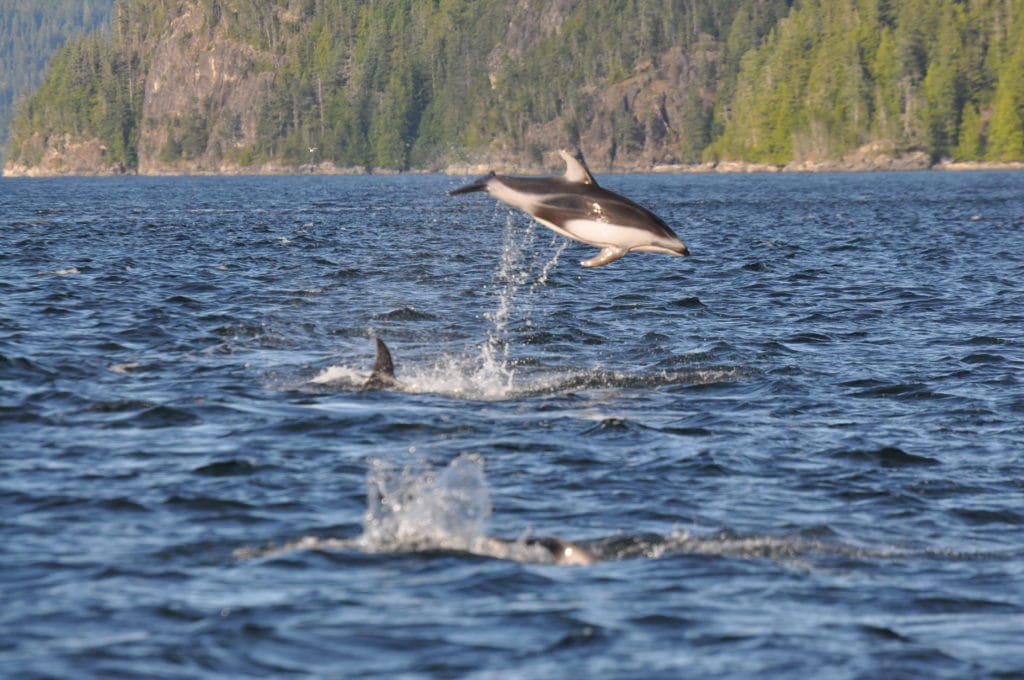 Dolphins bring out a child-like wonder in anyone that is lucky enough to see them out in the wild! In our area, we have Pacific White-Sided Dolphins.  They are playful, acrobatic mammals and can be the highlight of any tour!  Here are some facts that you may not know about them:

1.  There is currently no population estimate for how many Pacific White-Sided Dolphins exist, but they are the biggest species of dolphin in the North Pacific.  We see them quite often and can identify them by their frequent out-of-water leaps!

2.  Super pods, which are when there are 2,000 in one group, have been spotted on many different occasions.  There have even been reports of a pod that reached 6,000!

3.  Their diets consist of squid, salmon, and small schooling fish such as herring, sardines, and anchovies.  They eat about 20 pounds of food a day.

4.  Pacific white-sided dolphins have a 12-month gestation period.  The females reach sexual maturity between the ages of 7-10.

6.  They have around 60 teeth which are only used to grip fish, not to chew them! Dolphins swallow their meals whole.

7.  They are commonly seen “bow riding”, which is when they surround and swim in front of travelling boats, as well as “riding the wake” behind moving vessels.

8.  Dolphins are very social creatures and they are known to travel in pods for their entire lives!

9.  Pacific white-sided dolphins are made up of three colours: dark grey on top, white on their sides and underneath, and a lighter grey stripe along each side.  Their distinct colouring makes them easy to identify!

10.  These mammals are often referred to as “lags” which is a shorted version of their scientific name, Lagenorhynchus obliquidens.

Have you been lucky enough to see a pod of these majestic mammals out on the water?

Thanks to MERS, Vancouver Aquarium, NOAA Fisheries, and The Whale Trail for being wonderful resources!